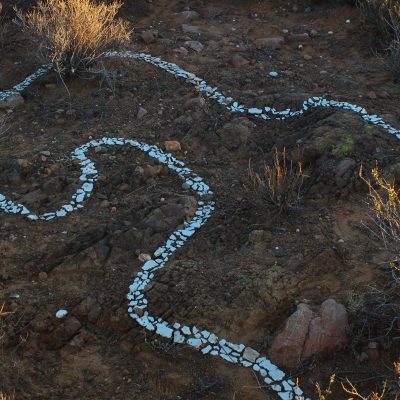 Over the weekend of 5 and 6 September 2015, we launched Anni Snyman’s first Site_Specific Karoo Geoglyph, the Snake Eagle Thinking Path, in Matjiesfontein. Matjiesfontein is a historical little town in the Karoo area of South Africa, situated right next to the railroad and the N1 highway that connects Johannesburg and Cape Town. The site of the geoglyph is the area in which a regiment of British soldiers were stationed during the Anglo Boer war. While creating the geoglyph (over three separate working weeks of which I joined for the two last ones) we found rusted food tins, buttons, pieces of glass and even a bullet shell or two that speaks of those long-gone years.

I created two land art pieces on the site, using cracked pieces of lime. Inspired by the plants, that includes a variety of scraggly bushes and succulents, I created a tree that divides its branches in the same way that a river flows. The cracked texture alludes to dried bone and also dried soil surfaces where water has evaporated. And I created a ‘snake eating its own tail’:

Ouroboros or uroboros (/jʊərɵˈbɒrəs/; /ɔːˈrɒbɔrəs/, from the Greek οὐροβόρος ὄφις tail-devouring snake) is an ancient symbol depicting a serpent or dragon eating its own tail and it symbolizes the cyclic nature of the universe: creation out of destruction, Life out of Death. The ouroboros eats its own tail to sustain its life, in an eternal cycle of renewal.

This symbolic snake tied in with the two entwined snakes within Anni Snyman’s Snake Eagle drawing, a 170m wide drawing within the Karoo landscape, situated on a historic site where the British soldiers were stationed during the Anglo-Boer war in South Africa. The significance of my work with this in mind comments on the cycle of life that exists within this specific site – the scraggy bushes and endemic succulents of this area were burnt and destroyed to make space for the soldiers’ camp 1899-1902, and since then they have regrown and allowed the site to sustain life to the small Karoo creatures and subsequently the Snake Eagles of the area – an endangered species. When the mountains were formed in the area, water was more available and carved into the landscape. Over millions of years the wind and sun has shaped the koppies (hills) and expanses of this interesting landscape. It changes and the cycle continues, just as human occupies, uses and protects and thus forming part of this integral and eternal process and state of existence.

The Snake Eagle Thinking Path (meander) in Matjiesfontein is the first permanent geoglyph created as part of the Karoo Geoglyph Project. It is in honour of a breeding pair of Black Chested Snake Eagles resident in the area. We hope that the geoglyph will attract global attention via Google Earth to the precarious semi-arid biome of the Karoo, encouraging tourists to visit the town of Matjiesfontein and walk the meander.

For more photographs and information, visit the following links: