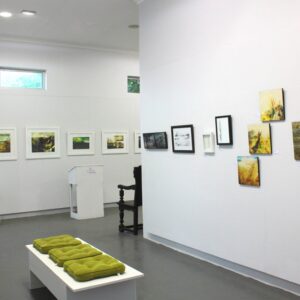 An exhibition of work by Janet Botes & Jaco Coetzee

“The title of the last show on the Liebrecht exhibition programme for 2015 is in inverted commas since these words might as well have been quotes from the memoirs of the two participating artists, both in terms of who they are and what they do.

Janet Botes does land art, and Jaco Coetzee is a plein air painter. It’s simply the way they are, it’s in their nature to be outside while expressing themselves in a creative way, and that is why they are passionate about what they are doing. In fact, Coetzee has no studio other than the open air.

But the “nature” these two individuals concern themselves with is not simply the one in the narrow sense of the word – the trees, the water, the birds, the animals. It is not about these living organisms divorced from human existence. In fact, it’s quite the opposite.

Since his debut in 2010 Coetzee’s body of work for a solo has always been almost a 50/50 mix between landscapes and streetscapes. This is because he understands the concept of “nature” in its wider sense – a whole representing the nature and living world of man. In one of his largest and most important works to date – a 1,1 x 0,9 m street scene of people walking on the cobblestones of Green Market Square from the Leeukop side down to Adderley Street during rush hour – one experiences humans, trees and buildings forming an integrated whole. Coetzee has always been a recorder of the bigger picture, and his work for this show is no different.

The same type of understanding underlies much of Janet Botes’ work, which she formulates in the following way: “A lot of my previous work and projects explored the landscape in its different forms and contexts – predominantly focusing on human interaction or relationship with it. ….. I have come to believe that the core of our problems is not the system itself. It is not society, the government or our cities. The core of the problem is the individuals that make up our society and build the inefficient and destructive systems, and individuals who see themselves as disconnected beings, as separate from nature, rather than a thread in the web of life.”

Angst and a sense of alienation, no doubt, are real human feelings/emotions in the 21st century. However, when one does in fact succeed in escaping from the prison of one’s anxieties and open your eyes to your surroundings you should probably see a different picture. It is the picture which a visitor from outer space will see – human beings, human dwellings and structures, animals, trees, birds, water.

Images of human structures reduced to rubble in war-torn territories, images of the charred remains of human bodies resulting from warfare, images of mutilated animals, and images of seriously polluted rivers are equally disturbing, or should be. This is because, deep down, we know that the existence of all of these – humans, their dwellings, animals, rivers – constitute life on earth. It is a truism, but one which – for a variety of reasons, most of them related to human greed – has become a potential tool for self-destruction.

The work of Janet Botes and Jaco Coetzee on this exhibition is proof that at least two human beings on planet earth still grasp this simple truth. And it’s an assurance that there are two human beings to switch off the lights should they be the only two to come to this understanding.”